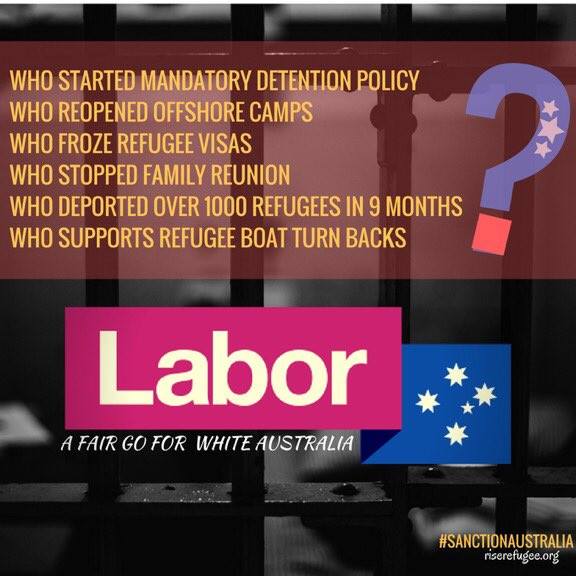 RISE encourages the public to remind themselves that BOTH major parties have proven to be extremely willing to torture and punish refugees and asylum seekers for political gain while campaigning and while in federal government. This document contains a reminder of only SOME of the Australian Labor Party’s horrific record of refugee and immigration policies, actions and scandals during their last term in Federal government.

Institutional Rape, Torture, Xenophobia, Queer-phobia, Abuse and Refoulement MUST NOT be tolerated in any shape or form. It doesn’t matter if it is for one minute or one day or indefinitely. If you do so under the cloak of border control’ or ‘humane refugee policies’ or “combating people smugglers” then you are an oppressor who is discriminating against one of the most persecuted people on the planet. This is what Australian politicians are advocating for during the 2019 federal election. eX-detainees in Australia, have the right to resist and request our supporters NOT to cast your votes those oppress our communities. We call for the abolition of detention centres and refugee boat push-backs during this Federal election.
RISE believes that this aggressive culture of xenophobia and fear of immigration prevails throughout Australia-perhaps attributable to Australia’s foundation of white colonisation including border control mechanisms of the ‘White Australia’ policy to police who comes into
this land, and the circumstances in which they come. Due to Australia’s aggressive, racist mandatory detention policy, our eX-detainee members are permanently damaged, criminalised and made to feel unwanted. This has turned us into an underclass, where we are structurally disabled forever in Australia. Further, it is alarming that after the trauma of fleeing one’s homeland, the trauma of indefinite and prolonged administrative detention and the trauma of settling into an unfamiliar environment, people are expected to deal with such overt anti-refugee sentiments all over the country.

Below are SOME of the Australian Labor Party’s horrific record of refugee and immigration policies, actions and scandals during their last term in Federal Government:

Asylum Seekers Sew Lips Together in Protest of Detention on Christmas Island, 2010.

RISE Statement in Solidarity with Hunger Strikers in Nauru, 2012.

RISE Our Views on Offshore Processing, 2012.

eX-detainees do not support any form of detention, doesn’t matter 1 day or 30 days or 1 year. Say NO to abusive and institutionalised control of refugees during this federal election. Enough is Enough, RISE eX-detainees urge the Australia public NOT to vote for our oppressor or the parties supporting any refugee detention policies.

Nothing About Us Without Us! While you are reading our advocacy materials, media statements and following our campaigns, please remember RISE is entirely governed by and for by eX-detainees, asylum seekers and refugees. Furthermore, all of RISE’s hard work is managed and developed by eX-detainees, asylum seekers and refugees. Support self-determination of RISE: Refugees, Survivors and eX-detainees, by making a tax deductible donation TODAY via https://www.givenow.com.au/riserefugee