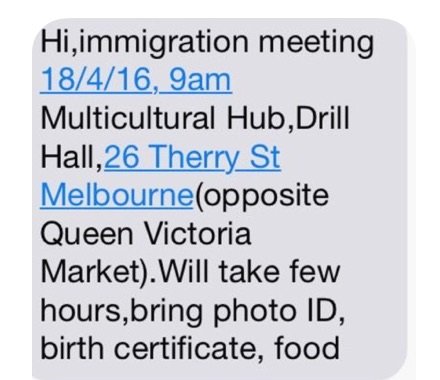 Are we human or what?

As refugees, asylum seekers and ex-detainees who make up RISE we condemn the inhumane treatment of asylum seeker families this morning when they were trapped and corralled by the Australian Department of Immigration and Border protection (DIBP) at the Multicultural Hub (Drill Hall), Melbourne from 9am to around 2pm.

One week ago, the Department of Immigration sent out a text (below) to several asylum seeker families and requested they bring photo ID, birth certificates and food. When the families arrived they were told they were being detained and were not allowed to leave the building for two hours. We were told by our members that there were at least 50 families with children who were divided into 7 groups according to languages/background and were informed of their detention at the venue.

One mother, a RISE member and ex-detainee, said “there were about 50 families and we were locked down for two hours, with two guards”.

The oldest baby is reported to be around 1 year old with most of the children ranging from 1- 12 months old. Another mother who is also an eX-detainee and RISE member said “most of the children started crying and we were treated like caged animals, we were scared to say anything and thought we were going to deported somewhere”.

Around 1.30pm an Immigration official is reported to have said “Now we are going to grant bridging visas for your kids but before you leave you need to clean the place, otherwise we will not give you visas. All asylum seekers were asked to line up and were handed a bridging VISA document at the door”.

One member told us that “I was so scared to even ask questions…even ask whether we can feed our babies and it was a very traumatic experience”.

RISE members told us that there were no facilities whatsoever for the kids and we were expected to manage being detained for hours in a empty hall with one toilet.

Former ex-detainee and RISE founder Ramesh Fernandez said “Australian refugee policies are designed to abuse and torture refugees and asylum seekers coming on boats, and to further treat them as less than human when they try to settle into normal lives. These people were lured into a trap and treated like animals.”

He further added “This is just one example of the brutal practices of Australian immigration detention guards, border force and immigration officials that we refugees have been experiencing for over twenty years in this so called democratic country – both onshore and offshore”.